Minerals have fascinated mankind since the beginning of time

Mineralogy is a universe where dreams and imagination can play without limits, an unknown universe whose repercussions have been infinite in our history and our lives. The mineralogical sample, a work of nature elaborated during times exceeding the human scale in conditions of temperature and pressure, variations of environment often impossible to reproduce, is unique. Moreover, with a few examples, its duration seems eternal to us. This permanence is for man something unusual. Since ancient times, the geometrical shapes of crystals in contrast to the very different shapes of living beings have been something of a puzzle. Although the geometrical arrangement of ions in crystals is nowadays a known concept, many people are still surprised when they see a pyrite or quartz crystal and cannot believe that it is the work of nature.
Finally it is from minerals that metals were obtained. The secrecy with which the ancient metallurgists surrounded themselves gave them an often magical content, which in the Middle Ages alchemy only increased. Everyone knows the power of gold over man and the legends linked to this precious metal: Jason and the Golden Fleece, Caesar's Gallic gold, the gold of the Rhine, the gold of the Incas for the Conquistadors, the gold rush in the Klondike or Australia. The rise in gold prices in recent years only confirms this tradition. And one does not react to a 25 kg gold nugget as one does to the bundle of bills that represents its value.

But what is a mineral?

It is a natural chemical compound, universally present. All the earth's crust is made of it. We wanted to restrict the term to non-living entities, but living beings themselves make and use minerals... phosphates in our teeth, calcite and aragonite in pearls, carbon in our hair... 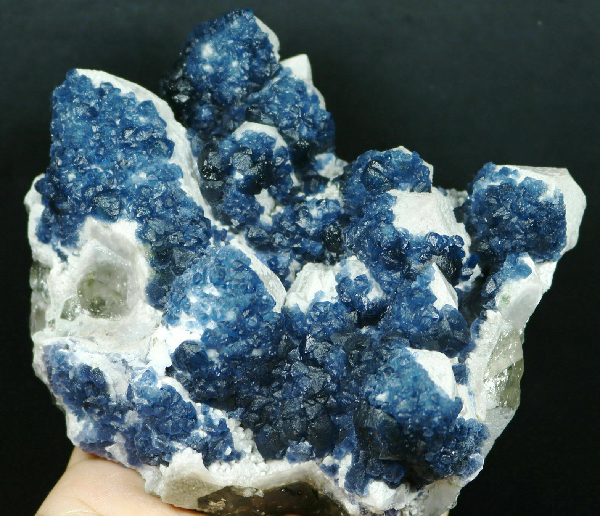 The minerals of collection

But all minerals of collection, well crystallized, are always exceptions. All rocks, in fact, are aggregates of crystals, visible in the case of granite for example, microscopic in the case of limestone. These crystals, generally small, entangled, do not attract the eye. For a crystal to be remarkable for the non-specialist, it must be more or less large, with beautiful faces or have an attractive color.

How are beautiful crystals formed?

The beautiful crystals require for their growth particular conditions:
- either a formation from solutions in completely filled cavities: druses or geodes. In the druses, the crystals represent only an exacerbation of the constituents of a rock, like the pegmatites. In the geodes, it is about filling of cavities or fractures by part of the encasing rock, case of the amethysts of Uruguay. It is difficult to establish a distinction between druse and geode in the magnificent crystals of the metallic veins or the alpine cracks.
- Or it may be a "strong" mineral, that is to say, it may crystallize either by replacing or by pushing back the elements of the rock in which it was formed. It is the case of many minerals of metamorphism, in particular the garnets. They appear only during the fracturing of the rock.
- or still their crystallization during the evaporation of lagoons in superficial conditions or in caves: case of salt, borates, gypsum, etc...
- finally crystals can be formed by sublimation, deposited by fumaroles.
When the minerals formed in the conditions listed above are heavy, hard, unalterable (cassiterite, diamond, ruby, etc...), they can persist as they are in alluvial sands.

Understanding the formation of minerals and crystals

Loving and admiring minerals is not much. To understand them is necessary. And for that, we need to talk a little about geology and crystallography. Three categories of rocks make up the earth's crust, these continental plates, which we know are mobile:
- sedimentary rocks are formed by deposition in marine, lake and river waters under the action of biological processes. They are limestones, marls, sandstones. The beautiful minerals are rare, nevertheless crystals of calcite, celestite can be met there.
- metamorphic rocks are due to the modification of sedimentary rocks during their burial or their heating at the time of the formation of the mountain ranges. There is in the presence of inhibition water, recrystallization of the elements present (case for example of garnets). The ultimate term of metamorphism, at least in shallow areas at the scale of the earth's crust (about 10,000 meters from the ground) is the fusion and formation of granite which, from its birthplace, can "rise" from the earth's crust, assimilating the surrounding rocks and then recrystallizing by cooling. At the end of this fractional crystallization, there is concentration and expulsion of water and rare elements which will form in the granite or in its surrounding rocks, the pockets or veins of pegmatites, as well as certain metallic veins, those in particular of tin, gold and copper.
- the deformations of the earth's crust are not only translated by folds of the mantle, from where by decompression, the basaltic rises. Opposed to granite, clear, light, rich in silica, poor in iron and magnesium, basalt is black, poor in silica, materials of the crust, hence a whole range of rocks still rejected before our eyes but their alteration by thermal waters gives birth in their cavities and fractures to a whole family of well-crystallized clear minerals: zeolites. 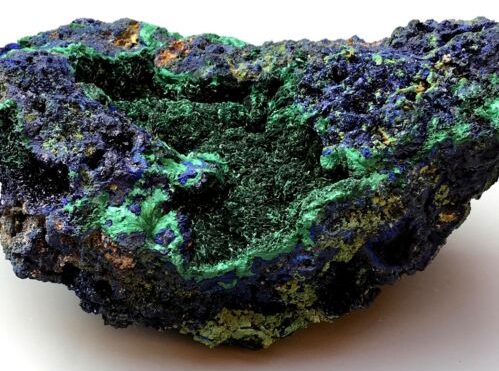 Malachite is a splendid mineral with green and purple shades

Where are the beautiful minerals found?

As we can see, it is mainly granites and their derivatives, on the one hand, and volcanic rocks, on the other hand, that are the source of beautiful mineral deposits. These are formed at great depths in environments where the temperature varies from 800° to that of superficial thermal waters. But these hypogenic minerals are not stable in atmospheric conditions; they decompose by oxidation and hydration giving a whole range of "supergene" minerals formed near the surface, without metallic luster but often beautifully colored. These are the oxygenated compounds: oxides, carbonates, sulfates of copper, lead, uranium.
Contrary to the organic compounds which comprise hundreds of thousands of species, to the synthetic non-biological compounds which are still very numerous, the number of minerals is small, hardly 3000 and almost a third of them are large rarities often absent from the best museums in the world. The continual improvement of analytical methods allows the addition of about twenty new species each year, but it is rare nowadays to discover spectacular new minerals that are widely crystallized.
Until the end of the XVIIIth century, the origin of the flat faces, the rectilinear edges which limit the crystals remained mysterious. The Cornish pastor William Pryce glimpsed what was to develop later the French abbot R.J. Haüy (1743-182). The latter showed that the mutual orientation of edges and faces involved simple laws of geometry and symmetry, which characterized a given mineral. Mineralogy became an exact science. The new chemistry that had just been born made it possible to connect forms and compositions while showing that, for a given composition, the forms and physical properties could differ (like diamonds and graphite). This defined the notion of mineral. The hypothesis of discontinuity of the matter appeared: the construction games of Haüy were replaced by the notion of imaginary networks according to which the atoms were arranged. In 1912, the German Laue, by discovering the crystalline diffraction of X-rays, confirmed this reticular hypothesis with, as a consequence, the establishment of the atomic structures of crystals. This orientation brought together all those who studied matter in the solid state: physicists, chemists, biologists and metallurgists.

The different forms of crystals

Haüy had defined seven crystalline systems always used:
- cubic: giving as the term indicates cubes (galena, fluorite, etc. ...) and derived forms: octahedra (cuprite), rhombododecahedra that is to say, solids with twelve diamond faces (pyrite), sometimes pyramid cubes (native copper).
- quadratic : right prism with square base, elongated or flattened giving by derivation octahedrons more or less flattened (wulfenite).
- orthorhombic : right prism with rhombic base, often elongated in needles, sometimes flattened, but with perpendicular termination in general with elongation (becquerelite, stibine)
- monoclinic: oblique prism with rhombic base (preserving the plane of symmetry), stocky but often elongated, flattened with oblique termination (erythrite).
- triclinic: solid with a rhombic base inclined in both directions. Of all, it is the one which presents the least elements of symmetry, it gives oblique parallelepipeds (axinite).
- hexagonal: right prism with hexagonal base, finished by a face perpendicular to the elongation or by a pyramid (beryl, apatite).
- rhombohedral : primitive parallelepipedic solid with six diamond-shaped faces whose sides are equal (dolomite, calcite). It is that which gives the most varied forms in particular the hexagonal prisms (rhodochrosite, proustite, dioptase). 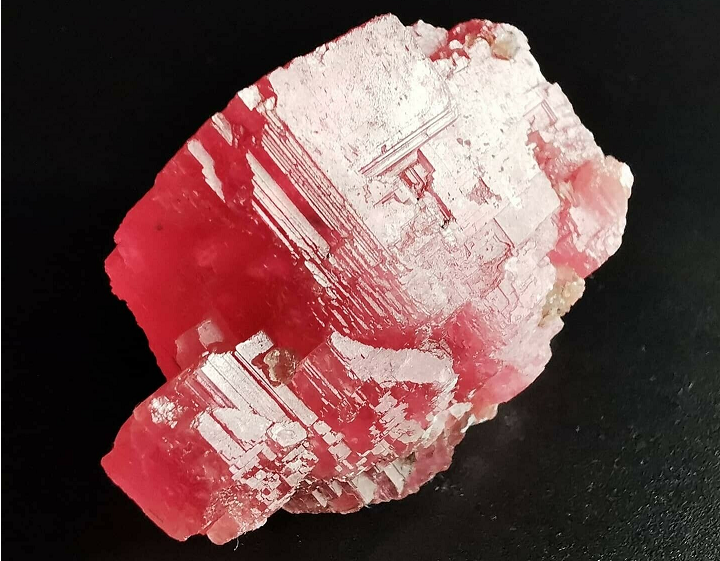 A nice example of rhodochrosite mineral

The axes of symmetry of crystals

To each crystal system corresponds a maximum symmetry including a certain number of symmetry elements: a center, an axis of rotation, symmetry planes (mirrors). A crystal with this maximum symmetry is called a holohedron. But if some of these elements are missing, the crystal is then meridian.
Tourmaline is often flat at one end, pyramidal at the other. Similarly, the regular tetrahedron respects only half of the cubic symmetry and has an equilateral triangle face opposite a trihedral vertex with three equal angles.
The macles are regular groupings of crystals having in common either a reticular plan (macle by hemitropy) or only elements of symmetry, the contact of the grouped crystals being unspecified (macle by penetration of the fluorite). Unlike single crystals, macles can have re-entrant angles (tin beak of cassiterite).
The rarest crystals you will find in our Top 100 Mineral Auctions are exceptions, extraordinary rarities that the mineralogical enthusiast has almost no chance of finding himself.