A selection of dinosaur claws for collectors

Dinosaur claws are very impressive fossils. They are very popular amongst fossil collectors for their beauty, their rarity and their impressive size. Indeed a Raptor killing claw is one of the most striking fossils you can find. Same for a T rex claw. Spinosaurus claws are also very large and make a masterpiece in any fossil collections. On this page, you will find our selection or rare dinosaur claws currently available online from reputable suppliers. We start our selection by the rarest claw fossils and then we end them by more common items. If you collect these impressive "dinosaur nails", you are on the right place.

Velociraptor claws are large and sharp. They were used to instantly kill their prey.  Raptor killing claws are rather rare to find and well-preserved museum-quality raptor claws will reach a very high value on the market. 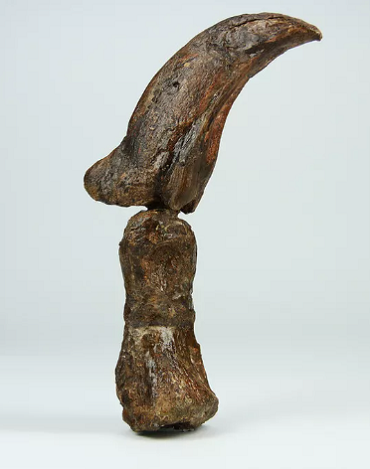 How much is a real velociraptor claw?

Well you can find some from $160 for common Dromaeosaur claws to $5,000 for the largest and most beautiful raptor claws. In our selection, we start by the rarest fossils and end it by the most common claws.

Find some velociraptor and utahraptor claws

Utahraptor is the largest known dinosaur of the raptor family to date. With an adult size of about 25 feet from head to tail and a weight comparable to that of the average theropod (between 1000 and 2000 pounds), Utahraptor was much more threatening and dangerous than its relative relatives such as the Deinonychus (which weighed about 200 pounds) and the Velociraptor (which weighed 30 pounds at the most). You will find in our selection some interesting Velociraptor and Utahraptor claws for your collection.

The hand claws of Spinosaurus dinosaurs are amongst the most impressive fossils you can ever found. Some monstrous Spinosaurus hand claws can easily reach 6-3/4" (about 171mm). They are found in various countries including Morocco and Egypt. You will find here a nice selection of Spinosaurus claws from various species like Spinosaurus aegyptiacus or Spinosaurus maroccanus for example.

Giant Ground Sloths are one of the largest mammals known to have existed. Species like Megatherium americanum lived in South America from the early Pliocene to the end of Pleistocene. Giant ground sloth claws are very impressive fossils for their size. Their curved claws were used to dig tunnels and to defend themselves from other individuals or predators. You will find on this page several interesting giand ground sloth claws, sourced from serious suppliers.